Victorian ties with Korea take off with new flights 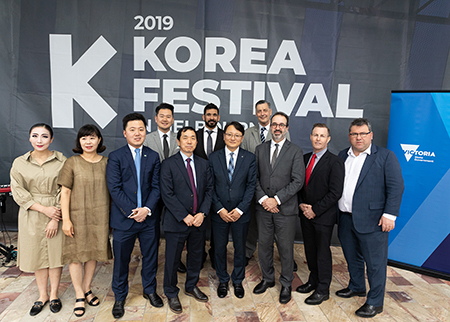 Major South Korean airline Asiana is launching direct flights between Melbourne and Seoul in a move that will strengthen ties with a key trading partner and attract more tourists and more investment.

The Victorian Government is partnering with Visit Victoria, Melbourne Airport, the City of Melbourne, and the Consul-General of the Republic of Korea to support Asiana as it launches a seasonal service from late December, with weekly flights in A330 aircraft.

If this season is successful, there is the potential for Asiana to establish ongoing flights, opening up new connections with a key market for tourists, investors and international students.

Minister for Jobs, Innovation and Trade Martin Pakula announced the new flights on Saturday after a roundtable meeting with business and government leaders on the sidelines of the annual Korea Festival in Melbourne at Federation Square.

South Korea is a key trading partner with Victoria, with two-way trade worth more than $3.2 billion in 2017/18. Direct flights will help more major Korean businesses join those already in Victoria, which include dietary supplement manufacturer Nutribiotech, Kumho Tyres and major conglomerate Hanwha.

The Asian nation is a major source of tourists to Victoria, with more than 61,000 Korean visitors spending $145 million in Victoria in 2018/19. It is also one of our fastest growing markets for international students, with numbers up 25 per cent in the last five years.

The Victorian Government is working hard to better connect Victoria to key Asian markets that play a crucial role in keeping our economy strong.

All of these new connections are helping drive growth in the numbers of international visitors to Victoria, up 4.3 per cent last year to 3.1 million. Spending is also up by 7.1 per cent to $8.6 billion.

Growing visitor number is all about creating more jobs in Victoria’s thriving tourism economy, which supports more than 232,000 jobs across the state.