Melbourne’s position as Australia’s home of video games has been proven again with the release of the latest global sensation, Untitled Goose Game, by Melbourne-based developer House House.

Supported in part by the Victorian Government, House House’s game puts the player in the position of an angry goose terrorising the residents of a small town, annoying them in various ways. 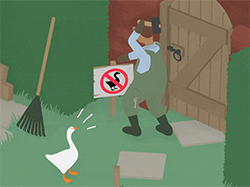 Since its release in mid-September, Untitled Goose Game is sitting at number one on the Australian Nintendo charts and number two – and rising – on the UK and US charts, the game has been a runaway success, featured widely in the media, from the New York Times to the ABC, as well as making a big splash on social media.

Untitled Goose Game isn’t the first Victorian video game to make waves on the global stage, with hit mobile game Crossy Road hitting the top of the download charts in every major territory around the globe.

At 53 per cent, Victoria is home to more than half of Australia’s games industry including more than 150 games studios.