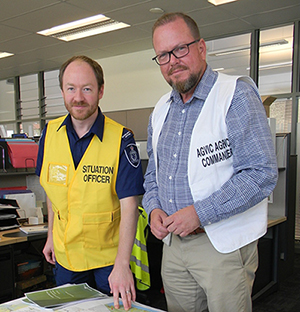 Australia’s state governments have rallied to support Victoria’s fire-affected communities, with Queensland among those sending expert assistance as we all work together to help our communities recover and rebuild.

For the past two weeks Tim Farry, the Manager of Prevention and Preparedness, Invasive Plants and Animals Program for Biosecurity Queensland, part of the Queensland Department of Agriculture and Fisheries, has worked with Agriculture Victoria following bushfires in the state’s east.

In mid-January Tim flew to Melbourne, where he was deployed as Deputy State Agency Relief Commander in Agriculture Victoria’s Attwood office, before relocating to Bairnsdale.

In his role as the Gippsland Incident Agency Commander, Tim coordinated Agriculture Victoria’s local response across the region, working with the Incident Management Team on planning, operations and logistics.

“The main focus has been to deploy field teams to fire-impacted areas to provide immediate relief to agricultural properties and undertake impact assessment to inform the industry recovery requirements,” Tim said.

Tim’s Victorian deployment is in addition to his membership on the National Biosecurity Response Team, where he is part of the Incident Control Mentor cohort.

Agriculture Victoria works with a range of state and federal agencies, including Emergency Management Victoria, the CFA, Victoria Police, the Department of Environment, Land, Water and Planning (DELWP) and the Australian Defence Force (ADF). 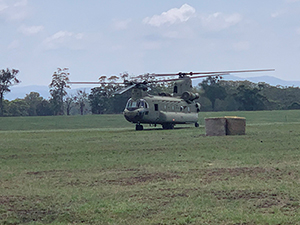 As soon as a fire-affected area is assessed as safe, multi-disciplinary field teams from Agriculture Victoria go in to support people on the ground with practical help, assessment and referrals to other agencies.

It might include assisting with animal welfare or providing technical advice on the safe disposal of carcasses, destocking and transport, or feeding, where limited fodder is available. Field teams also work with other agencies, including the ADF, to deliver fodder to remote and isolated areas.

“We have had significant support from the ADF both with aerial fodder drops – using Chinooks to deliver hay bales – or doing reconnaissance to assist with assessment and location of impacted properties,” Tim said.

For more on Agriculture Victoria’s work in fire-affected areas, visit their website.