Purple hive of activity at Victorian ports to protect our bees 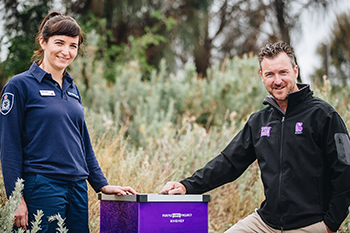 Artificially intelligent beehives are being installed at Victoria’s ports to as protection from exotic pests and diseases, in an initiative backed by the Victorian Government.

New Agriculture Victoria agreements with Bega Cheese and HiveKeepers, which will trial technology for rapid detection of pests at Victoria’s ports, were launched at the Port of Melbourne yesterday

Purple Hive is a solar-powered device that detects bee pest Varroa mite, providing alerts in real-time using artificial intelligence and 360-degree camera technology. Purple Hive has been tested in New Zealand where the Varroa mite is established, to prepare for installation at the Port of Melbourne. HiveKeepers will install a smart hive at the Port of Hastings, which operates by identifying pests and recognising diseases through bee health and behaviour, and sending alerts to a remote computer or mobile device.

The National Bee Pest Surveillance Program has hives located at the ports of Melbourne, Geelong, Hastings and Portland that are monitored for exotic pests and diseases like Varroa mite every six weeks.

These ports are identified as a high-risk pathway for bee pests to enter Victoria, with bees from Varroa-infested countries travelling on ships that enter Victoria, which could threaten the state’s honey bee population.

In 2018, Varroa mite was detected on a ship that entered the Port of Melbourne. The Victorian Government worked with industry and community to swiftly ensure the detected mite didn’t spread through Victoria’s bee population and become an outbreak.

If Varroa mite was to become established in Australia, an estimated 20,000 cropping and horticulture industry businesses would be affected, as well as home gardeners and the wider community.

There are more than 12,800 beekeepers with almost 135,000 registered hives in Australia, which contribute to the state’s $17.5 million apiary industry.

Learn more about the apiary industry via the Agriculture Victoria website.