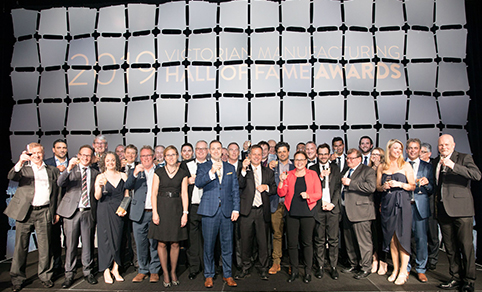 The Victorian Manufacturing Hall of Fame recognises outstanding businesses and individuals in the manufacturing industry. Last night, during National Manufacturing Week, the 2019 winners were announced.

Inaugural awards were presented to Air Radiators, awarded the Leader in Innovative Product Development and Commercialisation, and to Holden Special Vehicles, who received the award for Leader in Global Supply Chain Partnerships.

The Manufacturer of the Year (Large Business) was awarded to Dulux Australia, while Robert Bosch Australia took out the Leader in Industry 4.0 award and Barker Trailers was awarded the 2019 Leader in Workforce Skills Development.

Geoffrey Bell was inducted into the Hall of Fame Honour Roll, in recognition of the evolution and growth of A.W.Bell, established as a family pattern making business in 1952. The company now employs 100 people and provides unique metal parts and prototypes for businesses and entrepreneurs.

A number of other companies were also recognised with awards for excellence, including Safetech and Columbia Australia, with RUAG Australia the latest company inductee into the prestigious Hall of Fame.

Victoria's manufacturing industry contributes over $30 billion to the Victorian economy annually, employs more than 270,000 people and competes globally with $19.6 billion annual exports in 2017-18.

The Victorian Manufacturing Hall of Fame has been recognising outstanding businesses and individuals in the manufacturing industry since 2001.