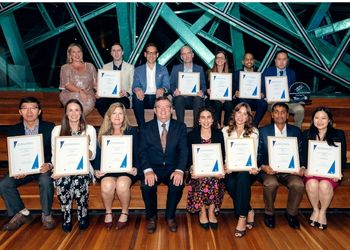 The Victorian Government recognised Victoria’s rising medical researchers at the Premier’s Awards for Health and Medical Research at a ceremony on Monday 4 April 2022.

The prestigious awards recognise early-career health and medical researchers for their exceptional contributions to medicine.

The top honour, the Premier’s Research Excellence Award, went to Dr Xiaodong Liu from Monash University for his work on stem cell therapeutics which can treat conditions such as Parkinson’s disease. Dr Liu’s research on improved stem cell therapies helped create a human embryo model made from skin cells. The model, termed an iBlastoid, was then used to study diseases affecting early development and infertility.

Claiming both the top award and the Basic Science Researcher category, Dr Liu took home a total prize of $20,000 and a trophy designed by Geelong-based Indigenous art collective Wathaurong Glass.

The awards were judged by a panel of six experts from the research sector, with winners each receiving $5,000.

In the past year, the Victorian Government has invested more than $590 million in medical research – including up to $400 million for a new Australian Institute of Infectious Disease to lead the fight against future pandemics.