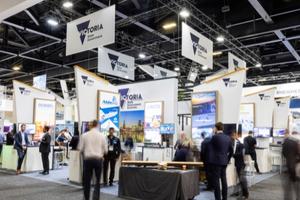 Victorian defence companies were on show at Indo-Pacific 2022 in May, the largest defence industry event this year in Australia.

The Victorian Government hosted 28 Victorian defence industry businesses at its dedicated Pavilion – demonstrating the breadth of products and technology made in the state.

Exhibitors at the Pavilion benefited from visitors including the Chief of the Australian Navy, Vice Admiral Michael Noonan, the Australian Defence Export Advocate and a delegation from Hanwha, and held meetings with major international defence primes to identify future opportunities for Victoria.

Among the companies featured at the Victorian Government Pavilion was Moog Australia, which showed products including its Naval ElectroHydrostatic Actuation System and missile capabilities. Moog has operated in Australia for more than 40 years and is based in Melbourne. Its mission is to deliver precision motion control and weapon systems through Australian sovereign capabilities and local jobs in defence manufacturing.

Electronics manufacturer Coolon previewed its new digitised lighting at Indo-Pacific. The lighting system creates a wireless mesh network that simplifies control and maintainability of the lighting networks while delivering a sitewide IoT backbone. Coolon is a leading supplier of premium LED lights for harsh conditions including in defence and mining. Developed and manufactured in Victoria, the lighting systems help improve operational control and efficiency.

Textron Systems Australia displayed its Aerosonde® Small Unmanned Aircraft System which is designed to meet the requirements of military and commercial uses. The Aerosonde system operates in both day and night environments and is used for expeditionary land and sea-based operations. Established in Melbourne in 1995, Textron Systems Australia has been a pioneer in Unmanned Aerial Systems since its inception.

SYPAQ Systems also displayed its new technology, showing its disposable Unmanned Aerial Vehicle. Based in Fishermans Bend, SYPAQ is an engineering and systems integration company and builds autonomous systems, including drones and other innovative aerospace machinery for Australia’s defence force.

The Victorian defence sector contributes $8.4 billion to the economy each year, supporting around 36,000 jobs across industry and the Australian Defence Organisation.