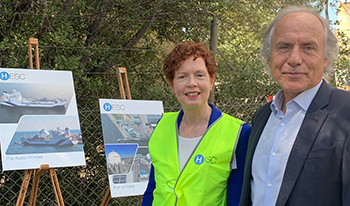 Government and industry are working together to build Australia’s hydrogen industry, HESC is one of the key projects identified in the recently released National Hydrogen Strategy.

As part of the project, hydrogen production has successfully started at AGL’s Loy Yang facility in the Latrobe Valley.

Carbon Capture and Storage (CCS) is a necessary condition for the HESC project to progress to full commercial scale.

HESC is developing alongside the CarbonNet project. If both projects are commercialised, carbon dioxide (CO2) captured during hydrogen production would be transported and stored by CarbonNet using CCS technology. Rather than entering the atmosphere, CO2 emissions would be safely stored in rocks 1.5 kilometres beneath Bass Strait, similar to the way oil and gas has been trapped naturally for millions of years.

“The news from the Latrobe Valley about hydrogen being produced is very positive and represents a step forward for both the HESC and CarbonNet projects,” he said.

“CarbonNet has the potential to support the clean production of hydrogen, fertiliser and bioenergy, further boosting jobs and reducing emissions.

“Storing CO2 emissions from industrial processes underground, as occurs at sites around the world, can enable the cost-effective decarbonisation of current and future industries.

“Well done to everyone involved in the HESC project, I look forward to hearing news of the first exports to Japan later this year.”

Read more about the CarbonNet project at The Victorian Connection and on the Earth Resources website.